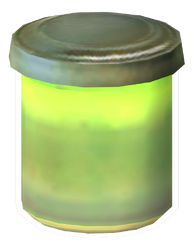 “I'm going to pop this jar of goop open and pour it all over me!”— Mr. RADical

The discovery of isotope-239 and possible military applications the radioactive igniting agent entailed was one of the key reasons for RobCo's hostile takeover of REPCONN Aerospace right before the Great War.[1]

Isotope-239 igniting agent is a fuel used for the rockets at the REPCONN test site in the quest Come Fly With Me. The item is marked as a quest item, and cannot be dropped. The rocket souvenirs sold at the Dino Bite gift shop in Novac contain the same agent inside them.

The only nuclide with an atomic mass of 239 and a half life capable of lasting 200 years would be plutonium-239, a form of fissile material that can be used as fuel for both nuclear reactors and nuclear weapons. It is produced in uranium-fueled nuclear reactors.

The isotope-239 located next to the dead pack brahmin, along with the other items near it, may fall through the map if touched and therefore become unobtainable. [verified]

Retrieved from "https://fallout.fandom.com/wiki/Isotope-239_igniting_agent?oldid=3448427"
Community content is available under CC-BY-SA unless otherwise noted.