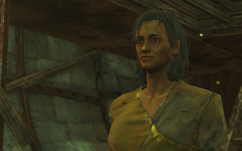 “You approach Atom's holy ground. Why? State your purpose, or be divided in his sight.”

Mother Isolde is the leader of the Church of the Children of Atom branch located in the Commonwealth in 2287.

Mother Isolde leads a group of non-hostile Children of Atom. She resides with fellow Children of Atom within the Crater of Atom, forming the sole human presence within the Glowing Sea. She is concerned about Brian Virgil's presence nearby, which is seen as an affront to Atom by some of the followers.

Isolde appears only in Fallout 4.

Her name is possibly a reference to ISOLDE (an acronym for Isotope Separator On Line DEvice) which is an experimental infrastructure within the CERN complex of nuclear and particle physics experiments.