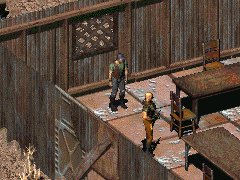 “It's hard being a starving artist.”

Ismarc is a singer found in the Skum Pitt in Junktown, in 2161.

Ismarc learned a little from an old man in the Hub, and also from the scavs in Adytum. Ismarc usually sings in the Skum Pitt in Junktown, but sometimes also in the Hub, Adytum, or at Lost Hills for the Brotherhood of Steel.

Your head is a bowl!
It's round like a mole!
I'd rather fry!
Than pay you the toll!

Another of his songs starts with the lyrics, "I know your mind".

The Vault Dweller can donate to Ismarc by putting caps in his hat. They can also get directions to the Hub, Adytum, and the Brotherhood by asking him.

Ismarc appears only in Fallout.

His song is likely a reference to the Nine Inch Nails song "Head Like A Hole" which goes:

Retrieved from "https://fallout.fandom.com/wiki/Ismarc?oldid=3357698"
Community content is available under CC-BY-SA unless otherwise noted.