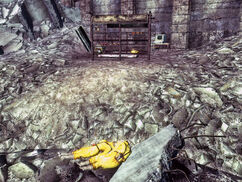 The camp and corpses

How to get to the camp from the factory

Isabella Proud's camp is an unmarked location in the Capital Wasteland. The camp is populated by the remains of Isabella Proud and her colleague Jason.

It consists of a tent containing a terminal with Isabella's research notes, some feral ghouls in a pool of water nearby, and the corpses of its former inhabitants, clad in radiation suits.

The camp can be tricky to get to. It is located in the "backyard" of the factory in Takoma Industrial. Before the player character finds the Talon tent, jump over the railing onto the half-submerged metal structure. Jump onto the small ledge and then travel right and then left between two buildings and take a right at the end of the alley. The camp is on the other side of a small pond.