Caucasian
“While Jason was scavenging the ruins, I caught a glimpse of the group by the pool in the afternoon.”— Isabella, referring to the ghouls

Isabella Proud is a dead scientist in Takoma Park in 2277.

Isabella Proud and her colleague Jason were scientists conducting research on feral ghouls. They had a camp near the Takoma Park factory, with a terminal describing their work. The text of her entries implies that she saw feral ghouls as non-sentient and attracted to high radiation. Thus, she engaged in a series of actions that eventually doomed both herself and her colleague.

Their corpses are behind the buildings on the other side of the canal., through the factory. Access is gained by climbing the broken metal structure in the canal and jumping to the ledge on the far side. Progressing between the buildings and heading right will lead to the edge of a pool. The whole area is radioactive. The campsite is at the far end. There are a few normal feral ghouls and one glowing one named Samuel, along with some minor items.

If resurrected via console command, Isabella is friendly towards the player character, while her colleague Jason is hostile.

Isabella Proud appears only in Fallout 3.

The bodies do not always appear. [verified] 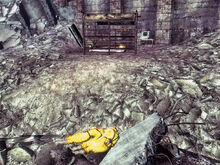