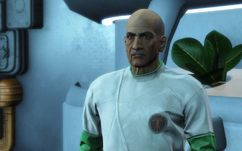 Isaac Karlin (username Karlin.I)[1][2] is a scientist working in the BioScience division of the Institute in 2287.

Karlin works in BioScience, with a varied research portfolio, spanning plant growth to the monitoring of synth animal models. At the behest of the director, he reported details on recent events involving the aggression of synth gorillas that he and BioScience personnel had recently witnessed.[3]

His bulleted response informed Director Holdren that the gorillas were exhibiting behavior abnormalities, including 16 separate incidents of heightened aggression. He continued to state the severity of the attacks, reporting the extreme aggression had resulted in the destruction of six synth handlers.

Karlin speculated the animals were reacting to perceived conflict happening around their pen and suggested that there may be a fault in the behavioral model. He let the director know that he was not confident a correction could be found and recommended their destruction. Barring that, he suggested that only synths be charged with caring for them, and no BioScience personnel should take the risk moving forward.

Isaac Karlin appears only in Fallout 4.

Retrieved from "https://fallout.fandom.com/wiki/Isaac_Karlin?oldid=3289405"
Community content is available under CC-BY-SA unless otherwise noted.