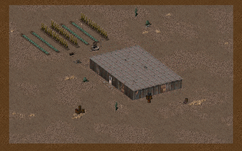 Irwin's Farm is a small farm outside the Hub owned by Irwin, which was forcefully overtaken by raiders. The Vault Dweller can only be taken there by Irwin himself, during the Help Irwin quest. Inside Irwin's farmstead are a total of seven moderately equipped raiders, spread around the interior.

Irwin's Farm appears only in Fallout.

Retrieved from "https://fallout.fandom.com/wiki/Irwin%27s_Farm?oldid=3133873"
Community content is available under CC-BY-SA unless otherwise noted.