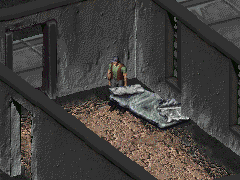 “You know, I don't dare to go there any more. Why don't you come back and let me know when it is safe to go back home again?”

Irwin is a refugee living in the Hub around 2161.

Irwin can be found hanging out in a broken down building near Bob's iguana stand. He had to flee from his home, which lies on the outskirts of the Hub, when raiders appeared from nowhere and invaded it. They now use it as a base for their operations.

He used to have a pet donkey named Pugsley, but it died in the raider attack.

Irwin appears only in Fallout.

Retrieved from "https://fallout.fandom.com/wiki/Irwin?oldid=3357685"
Community content is available under CC-BY-SA unless otherwise noted.