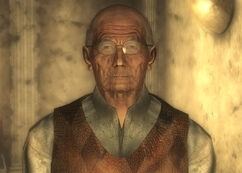 “Comrade! Hero of the people! Hello!”

Irving Cheng is married to Tiffany Cheng, and both live in Tenpenny Tower in 2277.

A rich old man with a secret identity, he believes he is the direct descendant of Chairman Cheng, leader of the People's Republic of China before the bombs dropped. He insists on calling himself and everyone else "comrade." He is embarrassed by his real first name, Irving, because it doesn't reflect his imagined heritage.[1]

In his computer terminal, he writes that his father was one of the leading officers in the Chinese Army. He also writes about his "plans" for creating a Communist society in Tenpenny Tower, which he terms the "Tenpenny Commune". Cheng heavily implies he is prejudiced against ghouls, as with many of the other Tenpenny residents.

Irving Cheng appears only in Fallout 3.

Retrieved from "https://fallout.fandom.com/wiki/Irving_Cheng?oldid=2602981"
Community content is available under CC-BY-SA unless otherwise noted.