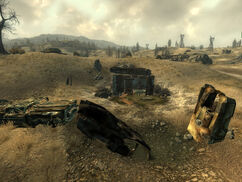 The irradiated outhouse is an unmarked location in the Capital Wasteland and is located south-southwest of the Chaste Acres Dairy Farm.

It is an outhouse under four cars, which together create a porta-shelter. Next to the outhouse is a bathtub and two boxes of ammunition. This landmark is on an irradiated pool of toxic waste.

Enemies such as radscorpions, yao guai, and deathclaws can spawn here at higher levels.

The irradiated outhouse appears only in Fallout 3.

Retrieved from "https://fallout.fandom.com/wiki/Irradiated_outhouse?oldid=3207278"
Community content is available under CC-BY-SA unless otherwise noted.