Outside:
Super mutants
Inside:
Feral ghouls

Immediately outside of the irradiated metro entrance, there is an entrance to the access hall, which will grant access to the overhead walkway where two super mutants (one holding either a minigun or missile launcher) will ambush the Lone Wanderer. Depending upon the level of the player character, one may be a super mutant overlord.

The tunnel system interior is slightly radioactive in some places. The stations themselves are collapsing, but there is an access tunnel on the right as one enters the station. Several feral ghouls, with one to two glowing ones are situated here. With the Broken Steel add-on a feral ghoul reaver or two can sometimes appear.

On the world map, L'Enfant South is east-southeast of the irradiated metro's Potomac River entrance. The interior space, however, places the two exits almost directly north-south of each other. In addition, the exit to L'Enfant Plaza faces northwest outside, while the interior door faces directly east.

The irradiated metro appears only in Fallout 3. 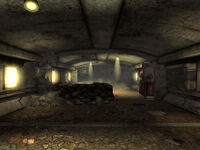