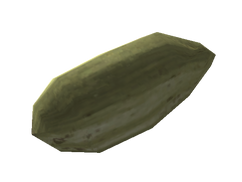 It can restore some of your Hit Points, while giving you a rather large dose of radiation. It has the same appearance as a normal banana yucca fruit. Oddly enough, unlike normal banana yucca fruit, this variety does not alleviate starvation or dehydration. It is also twice as heavy and half as valuable as the normal variety, being worth only 3 bottle caps. It uses the same image in the Pip-Boy as the regular banana yucca, but with an added glow.

Retrieved from "https://fallout.fandom.com/wiki/Irr._banana_yucca?oldid=3123751"
Community content is available under CC-BY-SA unless otherwise noted.