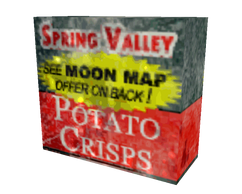 Potato Crisps are packaged in a small red and white box, with a yellow bubble encouraging the purchaser to "See Moon Map Offer on Back!"

Retrieved from "https://fallout.fandom.com/wiki/Irr._Potato_Crisps?oldid=3163174"
Community content is available under CC-BY-SA unless otherwise noted.