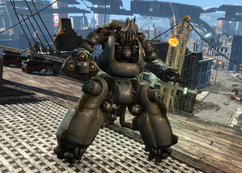 Captain Ironsides is a character appearing in Fallout 4. He is a sentry bot and the Captain of the USS Constitution.

Ironsides believes he is a colonial era Naval Captain. The terminal on the ship's deck indicates that Ironsides was designed to entertain tourists on the USS Constitution. Additionally, an entry in 2055, before the bombs dropped in 2077, indicated that something was overheating and leading to data corruption (the terminal entry is vague, but sentry bots are know for overheating.) This all alludes to the fact that Ironsides' programming has run amok in the years since his human caretakers died, and as a result he has assumed complete control over the ship, having reprogrammed a variety of robots to serve as his crew. Despite his bizarre mannerisms and choice of hat, Captain Ironsides is fully aware of his surroundings and knows full well that the U.S. Military no longer exists. He is attempting to install and operate a rocket thrust system and gives quests to assist in his efforts.

He also believes that since the U.S. Military no longer exists, and as he is the only military robot having "evolved" past his programming (as far as he is aware), he is now the highest ranking member of the U.S. Army and therefore is now in charge of the entire U.S. Military. As his first priority, Captain Ironsides has decided to mount a retaliatory strike on China.

Captain Ironsides has developed a large amount of mercy and prefers to avoid killing others whenever possible. Despite the total seventeen times in which the USS Constitution has been attacked, Ironsides believes that violence should only be resorted to when there is no other option, and, in spite of Mr. Navigator's requests, refused several times to plan a counterattack.

Captain Ironsides is unable to be hacked by players with the Robotics Expert 3 perk, making him unavailable as a companion using that method.

Captain Ironsides appears only in Fallout 4.

His name is most likely a reference to USS Constitution's nickname "Old Ironsides", given to the ship because she was said to be so sturdily constructed that "cannon balls just bounced right off her". She is the oldest commissioned warship currently afloat. (HMS Victory is older, but is laid up in drydock.) The ship has been well-preserved and fully restored, and currently serves as a museum and tour site in the Boston area.

Retrieved from "https://fallout.fandom.com/wiki/Ironsides?oldid=2506955"
Community content is available under CC-BY-SA unless otherwise noted.