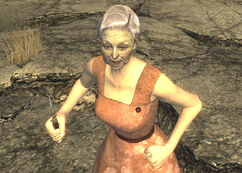 Irate Ida is a member of Maud's Muggers living in the Freeside of 2281, and can only be seen with the Wild Wasteland trait. She attacks the player character together with Malefic Maud and Rancorous Ruth.

An elderly lady who will attack the Courier once they exit Cerulean Robotics in Freeside. She is a part of Maud's Muggers, a group of elderly thieves.

She is noticeably small, 0.85 times the size of the Courier, according to the G.E.C.K. This makes her the shortest adult character in the game.

Retrieved from "https://fallout.fandom.com/wiki/Irate_Ida?oldid=3119685"
Community content is available under CC-BY-SA unless otherwise noted.