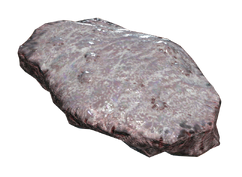 Ionized meat is a consumable item in Fallout 76.

Ionized meat is raw meat collected from a creature that has spent some time in a nuke zone. This has caused the creature's flesh to ionize and become extremely irradiated, giving the player character an extremely high dose of rads and a high chance of disease when consumed. It can only be consumed raw as there are no recipes that use ionized meat as an ingredient. However, unlike other raw meat, it never spoils.

It has a 2.5%-25% chance to drop, depending on creature level, from almost any creature (including robots) that is killed in a blast zone in an exterior area.

Retrieved from "https://fallout.fandom.com/wiki/Ionized_meat?oldid=3476237"
Community content is available under CC-BY-SA unless otherwise noted.