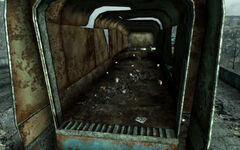 The internment truck is an unmarked location in the Capital Wasteland. It can be found on a highway east from SatCom Array NW-07c and northwest of the abandoned car fort.

This is one of the many unmarked trucks used by private contractors hired by the United States Marine Corps to transport arrested Chinese-Americans to specially designated concentration camps. Under Executive Order 99066, this particular group of people were destined for WRA site PA-32 in Pennsylvania. It seems this transport never made it to its destination, as it jackknifed on the highway, with its occupants soon killed by the falling bombs.[1][2]

A skeleton lies outside the truck. Inside the truck are more skeletons. In the far back there are two first aid boxes, two ammunition boxes, and a 10mm pistol.

The internment truck appears only in Fallout 3.