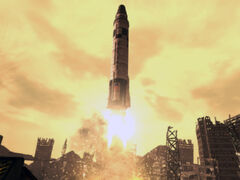 An ICBM launch in Lonesome Road

An intercontinental ballistic missile (often abbreviated ICBM) is a weapons system that has played a role in one form or another in the various Fallout games, for example as a world object in the Fallout: New Vegas add-on Lonesome Road and in Fallout 76. ICBMs mentioned/encountered in the overall game universe include the Minuteman XI and the Titan V, both originally operated by the pre-War United States Armed Forces.

The ICBM is a ballistic missile with a long-range typically designed to deliver a nuclear payload (usually one or more nuclear warheads). The missile launches up into low orbit, where it can then deploy one or more nuclear warheads on almost any location on the planet. They could be fitted with a variety of payloads, ranging from high explosive to biowarfare loadouts, but the most common were nuclear warheads. A typical single-warhead ICBM has a blast radius of several miles, and a fallout range of even further, depending on the explosive yield the warhead contains.

ICBMs can be launched from hardened (sometimes hidden) missile silos, or alternatively from mobile ground launch platforms such as missile trains and tracked or wheeled Transporter erector launcher (TEL) vehicles, such as the Missile carrier.

ICBM silos can be found throughout the Capital Wasteland. An ICBM launch terminal, launch codes, and facility can be found at Fort Constantine. The launch codes are for a Minuteman XI missile.[1]

The Delta IX rocket fleet, while not originally designed and built as ICBMs, were (somewhat crudely) converted into such around 2034.[2] One such example that was presumably fired against China on the outbreak of the Great War failed shortly after launch, crashing just outside the Statesman Hotel in Washington, D.C. where it can still be found as of 2277.

When the Great War broke out, 77 Chinese ICBMs were aimed at the city of Las Vegas, however thanks to Robert House's preparations, 68 of them were disabled or shot down in flight, and of the remainder, none struck Vegas itself, with confirmed strikes on Black Mountain and Nellis Air Force Base.[3][4][5] Raul Tejada recalls seeing Mr. House's anti-missile defense systems shoot down Chinese ICBMs during his unmarked quest Old School Ghoul.[6]

ICBMs play a much more prominent role in the add-on Lonesome Road and the overall history of the Divide. Several silos managed by the Commonwealth Defense Administration's Ballistic Defense Division were located in what would become the Divide, and when the Great War happened most of these missiles weren't launched. Years later, the Courier delivered a device that activated some of these missiles whilst they were still sealed in their silos, resulting in the destruction of Hopeville and Ashton in 2277. As the NCR-Legion War reached its height in 2281, Ulysses, a former frumentarius who survived the destruction of the Divide, returned to the area to use the remaining missiles to tip the balance and win the war for the Legion.

Luring the Courier back into the Divide, he sent them through the shattered landscape to see what they had done, and to meet him at his Temple, where most of the still functional Minuteman XI ICBMs were located. During the course of their traversal of the Divide, the Courier launched an ICBM from the Ashton missile silo, creating what Ulysses called the Courier's Mile. Once they reached his Temple, the Courier faced off against Ulysses, and through words or weapons beat him. They then had the choice of redirecting the missiles to hit NCR or Legion targets of their choosing or could attempt to cancel the launch.

Pre-War, at the USAF's sentinel site located to the southwest of Boston, developmental work was underway on an unidentified 'heavy' ICBM intended to allow it to deliver multiple Mark 28 bombs (originally designed to be airdropped from strategic bombers) against a target.[7] The missile itself is not seen in-game, however.

ICBMs play a large role in the main story of Fallout 76, as Vault 76's overseer has disappeared while attempting to track down and secure the three missile silos hidden around Appalachia.[8] Fallout 76 is also the second game in the Fallout series where player characters can launch ICBMs, however unlike in New Vegas, the player character has to track down the launch code, and can aim where the warhead is going to go to a greater extent.

The general design of most of the ICBMs seen in Lonesome Road resembles a combination of the SM-65 Atlas and the LGM-25 Titan-II. This particular design appears to be designated as "Titan V," likely a Star Trek Easter egg. Other missiles encountered seem to be Minuteman XIs.

Retrieved from "https://fallout.fandom.com/wiki/Intercontinental_ballistic_missile?oldid=3343592"
Community content is available under CC-BY-SA unless otherwise noted.