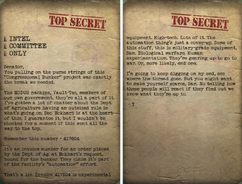 It can be found inside Sam Blackwell's bunker, inside a file cabinet in the middle of the secure archive room, only during Bunker Buster.

Senator,
You pulling on the purse strings of this "Congressional Bunker" project was exactly the break we needed.

The MODUS machine, Vault-Tec, members of our own government, they're all a part of it. I've gotten a lot of chatter about the Dept. of Agriculture having an outsized role in what's going on. Sec. Eckhart is at the heart of this, I guarantee it, but I wouldn't be shocked for a moment if this went all the way to the top.

It's an invoice number for an order placed by the Dept. of Ag. at Eckhart's request, bound for the bunker. They claim it's part of the facility's "automation" effort.

That's a lie. Invoice 417604 is experimental equipment. High-tech. Lots of it. The automation thing's just a cover-up. Some of this stuff, this is military-grade equipment, Sam. Biological warfare. Human experimentation. They're gearing up to go to war. Or, more likely, end one.

I'm going to keep digging on my end, see where the thread goes. But you might want to make yourself scarce, Sam. No telling how these people will react if they find out we know what they're up to.

Retrieved from "https://fallout.fandom.com/wiki/Intelligence_memo_-_8/16/77?oldid=3190530"
Community content is available under CC-BY-SA unless otherwise noted.