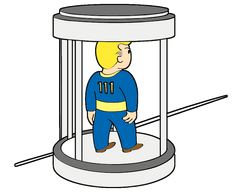 “The Institute is now your home as much as it is mine. Please, take some time and get to know it. Meet the people you'll be working with.”— Shaun

Institutionalized is a main story quest and an achievement/trophy in Fallout 4.

After successfully teleporting into the Institute, the Sole Survivor will be greeted by a voice coming from hidden speakers. It is possible to acquire the holotape needed for Inside Job at this time, as the console is right at the entry/exit point of the Institute. After following the voice through the empty Institute corridors and into an elevator, the Sole Survivor eventually enters a room to find a scared and confused child. When discovered to be a 10-year-old synthetic Shaun, a man named Father enters the room and shuts him down with a code phrase. He will then initiate a conversation with the Sole Survivor which reveals that he is the real Shaun and the director of the Institute, as well as several other details regarding the Sole Survivor's situation and the details surrounding his initial kidnapping by the Institute. After speaking with him and agreeing to join the Institute (alternatively stalling by telling him they want to think about it), the player character is free to explore the facility.

Speak to Clayton Holdren, Allie Filmore, Justin Ayo, and Madison Li, who installs a relay into the player character's Pip-Boy, allowing fast travel to and from the Institute.

Retrieved from "https://fallout.fandom.com/wiki/Institutionalized?oldid=3437796"
Community content is available under CC-BY-SA unless otherwise noted.
... more about "Institutionalized"
RDF feed
Has platform
PC +, Playstation 4 +  and Xbox One +