Institute scientists are scientists residing in the The Institute, they are working within all the institute divisions. They are involved in several scientific programs including genetic modification of crops and the creation of synthetic gorillas.[1][2]

The scientists are also involved with the manufacturing of generation 3 synths;[3] in this role, a level of xenophobia and fear of advancement is expressed in synth development.[4] They are also involved in retention by the SRB assisting in operations within the Commonwealth.[5] They will also question the need to destroy first generation synths.[6]

Outside of their workplaces, the scientists will comment on events occurring around the Institute, showing awareness of Phase 3, discontinuation of food supplements, and the presence of coursers.[7][8][9]

Depending on the actions of the Sole Survivor following the quests Building a Better Crop, Plugging a Leak, and A House Divided, Institute scientists will comment on the outcomes, expressing praise at being able to deal with situations and concern at banishment of members of the Institute.[10][11][12] Banishment to the Commonwealth is seen as worse than death to the scientists.[13] Should the Sole Survivor be banished by murdering Father, they will threaten to hunt the Sole Survivor down and kill them in turn.[14]

Institute scientists appear only in Fallout 4. 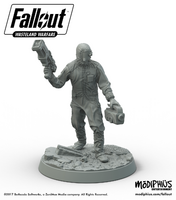