The Institute reactor is a section of the Institute in 2287. It will only be accessible once Mass Fusion is completed for the Institute or during The Nuclear Option for other factions.

This ancient experimental nuclear reactor was originally built for the Commonwealth Institute of Technology before the war. Over the years, the Institute advanced the technology, made a great many improvements, and are finally nearly ready to activate it in 2287, with the goal of achieving energy independence and thus the ability to sequester themselves from the surface world indefinitely.[1] Depending on which faction the Sole Survivor chooses there will be a change in the events that take place here.

If the player character decides to join the Institute they will be called to the reactor room to insert the beryllium agitator into the reactor, no turrets will be hostile and the room will be filled with scientists. By doing this the Institute will be propelled into the future with enough power to sustain them indefinitely.

The reactor consists of old CIT underground infrastructure adapted by the Institute for their own use. The first room contains auxiliary generators, with a long corridor leading to the control room. The control room connects through a narrow corridor to the locker room where CIT engineers once prepared for work on the reactor. The main room is centered on the tokamak fusion reactor sitting against the far end wall, with catwalks and jury-rigged Institute gear surrounding it. When fighting against the Institute, the entire area is the final standoff with elite Gen 2 synths, posted as a last-ditch defense against the attackers.

The Institute reactor appears only in Fallout 4. 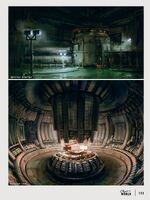