The Institute laser is a weapon system developed by the Institute following their isolation after the Great War. All synths serving as soldiers, workers or coursers, as well as human scientists in the organization, receive a pistol or rifle of the organization's own design, engineered by Advanced Systems and mass-produced in a factory located within their headquarters. This is unlike the Institute's primary rival the Brotherhood of Steel, who use pre-War military laser weapons.

The Institute laser is a bulky package with low damage, but it has a high DPS output. Compared to similarly equipped laser guns, Institute lasers offer a superior rate of fire at the cost of per shot damage. The lasers are lightweight and made of plastic. Its beam, when fired, appears blue instead of red. If one chooses to scrap a standard version of this item they will receive four rolls of plastic.

Institute weapons take up a large amount of the screen in the first-person view, which may obstruct vision of one's surroundings.

The Institute laser has the lowest damage-per-shot of all weapons that use fusion cells, so it may be wiser to use a regular laser weapon instead, as they have higher damage and damage per second values. 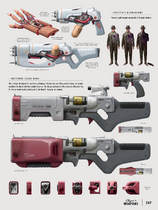 Automatic Institute rifle with beam focuser and scope modifications
Add an image to this gallery
Retrieved from "https://fallout.fandom.com/wiki/Institute_laser?oldid=3352653"
Community content is available under CC-BY-SA unless otherwise noted.