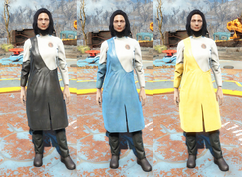 The Institute division head coat provides no Damage Resistance, but adds a bonus of 1 to Intelligence and 1 to Perception. It comes in five distinct variations according to which department the scientist who is wearing it is assigned to: black for Synth Retention Bureau, blue for Advanced Systems, green for BioScience, yellow in Engineering, and orange is the color for personnel unassigned to a department/Robotics. 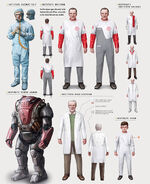 Retrieved from "https://fallout.fandom.com/wiki/Institute_division_head_coat?oldid=2748746"
Community content is available under CC-BY-SA unless otherwise noted.