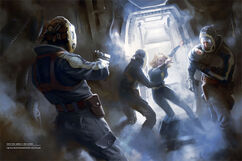 The female agent is seen alongside Kellogg and another agent, taking Shaun from Nate/Nora in Vault 111. She wrestles with the player character's spouse for control of Shaun, succeeding after Kellogg shoots the parent. She then hurriedly leaves the cryo bay as Kellogg checks on the "backup."

The male agent is working on a terminal near the entrance while the aforementioned events are taking place. He cannot be seen from the cryo pod and as such is only be visible during The Memory Den or Memory Interrupted.

The Institute agents appear only in Fallout 4.

Retrieved from "https://fallout.fandom.com/wiki/Institute_agent?oldid=3319959"
Community content is available under CC-BY-SA unless otherwise noted.