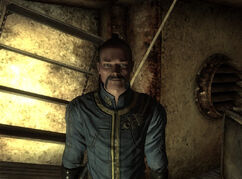 Insane survivors are the hostile inhabitants of Vault 106 in 2277.

As part of the Vault Experiment, experimental psychoactive drugs were released into the air filtration system of Vault 106 ten days after the door was sealed. The drugs affected some, but not all residents. This is evidenced by the note To anyone who gets this, which was apparently written by someone who was not affected. It seems as though the drugs sparked violence in those they affected, resulting in the "insane" killing everybody else in the vault, leaving only a few survivors.

The insane survivors present seem to be unlucky wastelanders and raiders who wandered into the Vault (see note below), and were overpowered by the still-potent drugs into thinking they were dwellers.

Insane survivors appear only in Fallout 3.

Retrieved from "https://fallout.fandom.com/wiki/Insane_survivor?oldid=3152088"
Community content is available under CC-BY-SA unless otherwise noted.