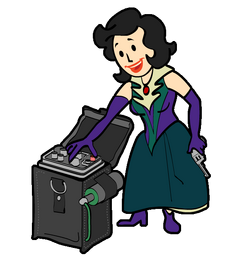 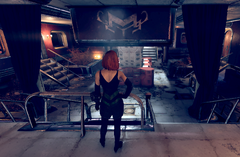 “Join the Order of Mysteries.”

Initiate of Mysteries is a side quest in Fallout 76.

Beneath Riverside Manor lies an elaborate secret facility. The worn veil identified the Vault 76 dweller as an Initiate... of the Order of Mysteries. The plot thickens!

Your mentor is in Lewisburg. She's dead and hard to find. Try to stay in the woods and come at her location from behind, there's plenty of creatures on the street near her. She's in an area where a street faire was going on. Lots of vendors had set up to sell stuff, but most of it isn't loot. It's near a brick building that looks like a government center, especially since there's lots of flags around the outside. She's behind a display of paintings, after a display selling bird-houses.

When trying to turn in the final part of the quest, when you log back into your account on Cryptos for the promotion, spam your spacebar key on your keyboard or jump button on your controller to get around the bug or you'll be stuck on the final part otherwise.[verified]

Retrieved from "https://fallout.fandom.com/wiki/Initiate_of_Mysteries?oldid=3371687"
Community content is available under CC-BY-SA unless otherwise noted.