One can choose the character and background for the Initiate. Choices include a human tribal born in farming village named Cyrus, a human orphan living on the streets known as Nadia, or a former ghoul mercenary in Set's army of Necropolis named Cain.

Brotherhood of Steel members have gone missing in Carbon, and the Initiate is tasked with searching for the paladins, starting with the nearby town. There, they fought the Raiders and killed their leader, Jane. They met the Vault Dweller from Vault 13, who told them that the paladins were in the city of Los.

In Los, they met Harold and Giese, a former technician of Secret Vault, which gave some indication of where to find the paladins and told them that of the super mutants found in the vicinity. Once in the torture chamber of the Church of the Lost, they found only Rhombus, sole survivor of the Brotherhood of Steel members, and fought Blake, the High Priest of the Church of the Lost. After the death of Blake, they escort Rhombus to a truck where he had hidden a key card for the Secret Vault, the base of the super mutants.

But while the Initiate recovered the key, Rhombus was attacked by a kamikaze ghoul. After the fight with many kamikaze ghouls, Rhombus, seriously wounded, gives the Initiate the key card and entrusted them with the task to stop the Super Mutants. The Initiate asked for information around the ghoul town of Los. A friendly ghoul named Giese offers them information to where the Warehouse Secret Vault was. The Initiate finds out that the vault was not far and ventures onward.

After fighting in the Warehouse, they managed to revive an old generator and took an elevator that overlooks the entrance to the Secret Vault. Here, two Super Mutants activate turrets, and the Initiate is forced to deal with them. After the encounter, the Initiate reaches the door of the vault and opens it with the key card given by Rhombus and enters.

Arriving in the last zone, the Initiate meets up with Attis after he had tested the FEV on himself, and fights the Initiate, but during the battle, Attis mutates into a blob-like creature. The Initiate fights through the blob in order to gain access to a computer terminal that can start the decontamination of the Secret Vault. The Initiate then sprinted to a monorail car in order to escape the self-destructing facility. The Initiate managed to escape and found themselves in the Wasteland a few miles away from Los and the Secret Vault, where they saw the explosion.

All three Initiates together 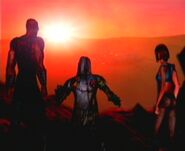