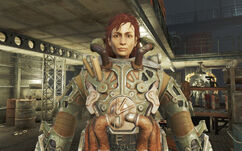 Head of engineering
Proctor for the Order of the Shield

“Well, with a big, bad soldier like you watching my back that's not going to happen, now is it.”— Ingram justifying her decision to travel to the Mass Fusion building.

Proctor Ingram, registration IG-444PR,[1] is head of engineering and the proctor for the Order of the Shield at the Prydwen in 2287.

Proctor Ingram is a woman with the drive and tenacity matching that of Arthur Maxson. Bound to her power armor frame, Ingram lost her legs in combat in the Capital Wasteland, as a result of a hundred-foot fall that left the power armor she was piloting totaled and both of her legs crushed, fit only for amputation above the knee. The cause? The power armor staging area she was stationed on was positioned along a ridgeline overlooking the battlefield. It took a mini-nuke in the fighting, causing the cliff to shear right off and with it the platform she was standing on. The rest was history.[2]

However, Ingram refused to just give up. As a talented engineer and programmer,[3] she continued to work for the Brotherhood regardless of her injury, eventually achieving one of the highest honors for a Scribe: The rank of Proctor and a posting to the Prydwen as the head of her engineering team. As such, it was her team that pulled the fusion plant from the derelict aircraft carrier and installed it within the Prydwen for its Commonwealth journey.[4] However, her biggest desire is to return to the field and fight among soldiers. Although her customized power armor frame was designed with that opportunity in mind (over a period of six months in cooperation with Knight-Captain Cade) and she rigorously trained in it to a degree that surpasses the abilities of other soldiers,[5] it was her skill as an engineer that was her undoing. As head of the Prydwen's engineering team and a crucial member of the Scribe order, Elder Maxson simply could not afford to clear her for field service. If she was lost, it would be a bigger blow to the Brotherhood than losing a whole combat unit.[6] He also had another reason - Proctor Ingram was necessary for the completion of a top-secret project the Brotherhood was completing within the Commonwealth.[7] So important, in fact, that when she inevitably disobeyed the Elder and assisted a field team at the Mass Fusion Building, the Elder overlooked this blatant disregard. Her only punishment was receiving a strongly-worded letter from the Elder.[8][9]

On a personal level, she is close friends with both Cade and Teagan. Cade is constantly looking for excuses to make her come into his infirmary,[10] while Proctor Teagan tries to cheer her up by digging up goods that she has a weakness for, like sweets, shared in the comfort of his cabin.[11]

Proctor Ingram appears only in Fallout 4.

After destroying the Prydwen in With Our Powers Combined, she will still be found at the airport, alive. [verified]

Retrieved from "https://fallout.fandom.com/wiki/Ingram?oldid=3457119"
Community content is available under CC-BY-SA unless otherwise noted.