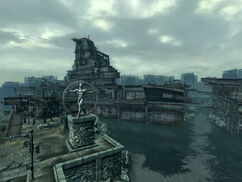 Infiltration is a main quest in Fallout 3 which was cut from the final game. Its quest stages can still be found in the game files but beyond that, there appears to be nothing left of it.

In this quest, the player character was supposed to enter Rivet City through an underwater hatch, acquire the energy source of "the prototype" and return it to Scribe Rothchild in the Citadel. The final objective was to meet Elder Lyons in his study.

The quest's editor ID is "MQ10." The prefix MQ designates it as the main quest and the number places it between The American Dream (MQ09) and Take it Back! (MQ11).

After the story of Fallout 3, a similar event takes place as the Brotherhood of Steel takes the reactor core from Rivet City in order to power the Prydwen.

Retrieved from "https://fallout.fandom.com/wiki/Infiltration?oldid=3229891"
Community content is available under CC-BY-SA unless otherwise noted.