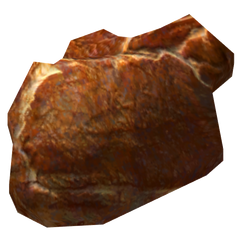 It is an infected piece of brahmin meat. It is classified as a miscellaneous item rather than a consumable, and as such cannot be eaten. It has no existing use within the game apart from aesthetically.

Six pieces can be found in The Gourmand, the Ultra-Luxe kitchen, accessible either via the private members only area or the public bar.

Infected brahmin meat was at one point intended to be used for sabotage against the members of Caesar's Legion occupying The Fort. A small number of resources exist pertaining to this, a popup message named FortPotMsg which reads: "This pot contains ingredients for the Legionaries' stew." The message then offers two options: "Leave the pot alone." and "Added

A similar unimplemented script and partially finished message exists for the Legion's mongrels as well: FortDogBowlMsg.

Retrieved from "https://fallout.fandom.com/wiki/Infected_brahmin_meat?oldid=3165375"
Community content is available under CC-BY-SA unless otherwise noted.