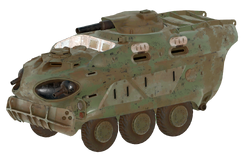 The infantry fighting vehicle was an armored personnel carrier of the United States Armed Forces before the War. It appears in Fallout 4 and Fallout 76.

The IFV is a six wheeled vehicle designed for supporting infantry operations and transporting soldiers through the battlefield in comfort. It is a fairly tall design, with a forward driver's position, sitting over the primary engine, in a compartment isolated from the troop section. The vehicle can carry six soldiers and two power armor units in reasonable comfort in this section, with a note that power armor units must stand for transportation. For defense, it is provided with a 105mm gun in an autonomous dorsal turret and a pair of ball-mounted 76mm guns to the sides of the driver's cabin, giving it its distinctive whiskers.[2]

The IFV could be used for a variety of purposes, such as transportation or, if fitted with a gurney and other necessary equipment, a medical evacuation vehicle. Due to its shielding, it could also be used to transport radioactive waste, for example, in decontamination operations.

The IFV appears in Fallout 4 and Fallout 76.

Convoy south of the Hubologist's camp

Convoy of IFVs with heavy tank near Bolton Greens

At the Sanctuary lake
Add an image to this gallery

Retrieved from "https://fallout.fandom.com/wiki/Infantry_fighting_vehicle?oldid=3220356"
Community content is available under CC-BY-SA unless otherwise noted.