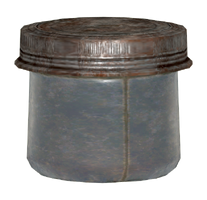 Inert flux is a consumable item in Fallout 76.

Inert flux is a consumable that is the result of allowing collected nuked flora (raw flux) to decay. It gives the consumer a +5 disease resistance and quenches thirst by 25%. To preserve the raw flux and prevent it from turning into inert flux, it must be crafted into stable flux, which will also allow it to be used to craft end-game recipes.

The following types of raw flux will decay into inert flux after a certain amount of time has elapsed:

It is added to the player character's inventory and replaces raw flux after a certain amount of time.

Retrieved from "https://fallout.fandom.com/wiki/Inert_flux?oldid=3495215"
Community content is available under CC-BY-SA unless otherwise noted.