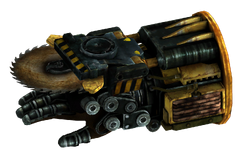 The industrial hand is a weapon in the Fallout: New Vegas add-on Lonesome Road.

The industrial hand was a tool in the Divide consisting of a mechanical glove with a circular saw blade mounted on the back, self-automated by an unknown power supply. It was used in industrial work for cutting materials such as metal or plastics, now repurposed for use as a powerful unarmed weapon.

The blade extends forward when the weapon is used. Unlike other unarmed weapons, holding down the attack button when wielding the industrial hand will cause continuous damage to targets that come in contact with the blade. The blade's continuous cutting action penetrates defenses, so the weapon ignores both Damage Resistance and Damage Threshold.

The industrial hand can successfully strike about 7,995 times from full condition before breaking.