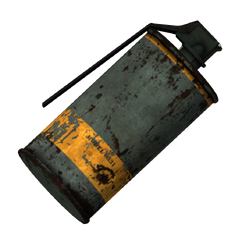 The AN-205M incendiary grenade (Model 0531) is a thrown explosive in Fallout: New Vegas.

A self-contained incendiary bomb, the Army/Navy 205M incendiary hand grenade is a multi-purpose weapon that can be used to damage, immobilize or destroy a variety of targets including weapons, ammunition, vehicles and soft targets. Unlike conventional incendiary grenades, relying on thermate mixtures designed for use as a tool, the AN-205M uses a modern combat mixture that allows it to be used offensively. Upon detonation, the sheet metal casing disintegrates, creating an incendiary blast in a two yard or 1.8 meter[1] radius. The burning mixture sticks to targets like napalm, continuing to deal fire damage until it burns out several seconds later.

This grenade is an improved holdout weapon.

Real name on the border