The imposter sheepsquatch is a unique assaultron found in Appalachia in 2102.

The modified assaultron unit was developed by Calvin van Lowe in his attempt to hunt down the fabled Sheepsquatch cryptid. It was designated "Mary's Little Lamb" by the Bysshe Company who sponsored van Lowe's development of it.[1]

Bysshe hoped to throw property values in Lewisburg into a freefall that way, so that it could buy the town up.[4] The project team consisted of Calvin (codenamed Blacksheep) as the main developer, Bo-Peep as the handler, and Big Bad Wolf as the fixer.[5] At some point, the imposter sheepsquatch would escape containment and Big Bad Wolf would attempt to contain the rogue assaultron through the pylon ambush site.[6]

A modified assaultron unit that is encountered during the Encryptid event.

The imposter sheepsquatch will appear as a boss fight at the pylon ambush site when summoned as part of the event Encryptid.

The imposter sheepsquatch appears only in Fallout 76, introduced in the Wild Appalachia update.

The sheepsquatch is a woolly-haired cryptid reported across numerous counties in West Virginia, predominantly within the southwestern region of the state.

Calvin van Lowe's design of the imposter sheepsquatch, as seen in his lab in Van Lowe Taxidermy 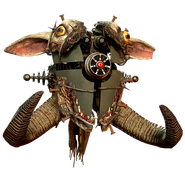 Imposter sheepsquatch outfit
Add an image to this gallery

Retrieved from "https://fallout.fandom.com/wiki/Imposter_sheepsquatch?oldid=3266866"
Community content is available under CC-BY-SA unless otherwise noted.