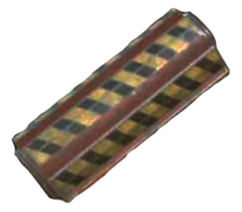 Ignition core is a miscellaneous quest item in Fallout 76.

Four are needed for the quest Earth Mover. They are the primary power source used to fuel the nuclear reactor within the Rockhound bucket-wheel excavator. Due to the amount of power the nuclear reactor consumed, Hornwright Industrial had to ask the Rockhound crew members to lower the power needed to operate and drive the BWE. This was so that the BWE could actually work for more than three minutes; however, this fuel inefficiencies came at the cost of less ore tonnage being excavated and therefore, less overall profits.[1]

Only craftable at a tinker's workbench after unlocking the ability to craft them during the Earth Mover quest.

Retrieved from "https://fallout.fandom.com/wiki/Ignition_core?oldid=3274646"
Community content is available under CC-BY-SA unless otherwise noted.