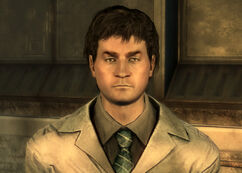 “Take care what you do here, and who you listen to. Some things are best left buried with the old world.”

Ignacio Rivas is a Followers of the Apocalypse scientist living at HELIOS One in 2281. He tends to the management of the plant alongside the NCR.

Rivas is a member of the Followers of the Apocalypse and has been working with the NCR on getting HELIOS One operational since the NCR took control of the location from the Brotherhood of Steel during Operation: Sunburst. Under the guise of research into the potential for solar energy,[1] Rivas was sent to HELIOS by the Followers in order to investigate its connection with the pre-War company Poseidon Energy, and its business outside of alternative energy.[2][3]

Despite the relationship of the Followers with the NCR, the NCR allowed Rivas to stay in order to gain as much information about HELIOS One as possible. Meanwhile, Rivas has been deliberately keeping them in the dark to conceal the existence of a powerful weapon, Archimedes II, from them.[2] The NCR hired an additional technician, Fantastic, to help in the repair of HELIOS. Luckily for Rivas, Fantastic turned out to be completely incompetent, having conned his way into the position. So far, he hasn't made any discoveries on HELIOS One's true purpose, much less getting anything at the plant to actually work, and Rivas is not planning on correcting that any time soon.

From his time at HELIOS, Rivas has learned that it was affiliated with the United States military in some way and holds the key to a secret still-operational orbital laser, Archimedes II, in Earth's orbit. However, Rivas is concerned what would happen if either of the warring factions (the NCR or Caesar's Legion in particular) happened to learn how to utilize the technology.[4][5] Personally, he hopes for a win-win scenario for the Followers where the energy is diverted equally across the region and not to power a weapon.[6] For now, Rivas keeps watch of the plant, making sure the dangers are minimized.[7][8]

Retrieved from "https://fallout.fandom.com/wiki/Ignacio_Rivas?oldid=3188385"
Community content is available under CC-BY-SA unless otherwise noted.