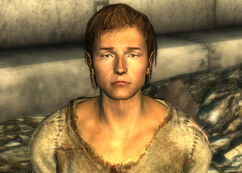 “She... she really misses being home and she's asked about me in here a lot! I think I had it all wrong. I shouldn't have come here. I bet Lucy is feeling just as bad as me. Please, tell Vance I've made my decision. I'm going home to Arefu. I hope to see you there as well.”

Ian West is a resident of Arefu and a member of the Family in 2277.

After the Family came to Arefu and his parents were killed, 15-year-old (born 2262) Ian was taken in by their leader, Vance, who feels a sort of kinship with him. When he was younger, his sister, Lucy, was always there to talk about his feelings, but when Lucy took off for Megaton, Ian was left alone in Arefu as the settlement's only child, sending him into a downward spiral of depression. Vance took Ian back to The Family's home, and Ian now ponders what his life has become and what he is to do next.[1]

Ian West lived with his parents in Arefu for many years with a strange condition that caused him to have a hunger for human flesh. He claims that this condition may have been caused when he hit his head when he was younger. Ian states that he and Lucy were playing outside, when a scavenger started harassing the brahmin outside of Arefu. When Ian went to warn him to stop, the scavenger shoved him aside, causing Ian to hit his head on a rock. Ian then jumped up and tore the scavenger's throat open with his teeth before his sister Lucy pulled him off[2] and they swore to never tell anybody. Eventually, without the presence of his sister, he snapped and killed his parents[3]. The Family were attacking at this point, and so the act was witnessed by their leader, Vance. Subsequently, the Family took him in and tried to convince him that he was not a monster. Disturbed by his strange hunger for human flesh, Ian goes under the guidance of Vance.

Ian West appears only in Fallout 3.

Retrieved from "https://fallout.fandom.com/wiki/Ian_West?oldid=3294638"
Community content is available under CC-BY-SA unless otherwise noted.