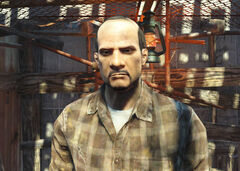 Ian is a dead raider in the Nuka-World maintenance shed in 2287.

Ian was one of the raiders working on the Gauntlet. He always drew the short straw and had to do less desirable jobs such as repairing turrets and cleaning up bodies. He eventually stole some booze and died just outside the Gauntlet himself.

Ian appears only in the Fallout 4 add-on Nuka-World.

Retrieved from "https://fallout.fandom.com/wiki/Ian_(Nuka-World)?oldid=3176849"
Community content is available under CC-BY-SA unless otherwise noted.