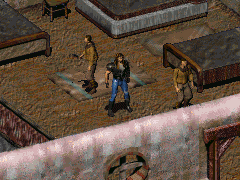 “I was a guard for the merchants of the Hub. However, I was shot during a raid by bandits. I've been staying here, since the people have helped me recover. Still, my knowledge of the outside world and my experience make me useful here.”

Ian is a former Crimson Caravan guard, now a Shady Sands guard and a possible companion who resides in Shady Sands in 2161.

Ian is a short, stocky caravan guard who adopted Shady Sands as his new home. He was working for the Crimson Caravan company during a routine caravan route to the small settlement. However, routine doesn't mean safe. He was shot by raiders and stayed in Shady Sands to recuperate.[2][3] The Shady Sands townsfolk helped him recover and ultimately Ian decided to stay with them. His experience and skills helped him contribute, as very few of the townsfolk ever left its safe walls. He occasionally makes a run to Junktown and the Hub to do trading. He is strong, confident, and independent. A perfect wastelander.[4]

These traits endeared the Vault Dweller to him. Together, they scouted Vault 15, learning that the water chip was in another Vault.[5] Following a long trek through the wastelands, the two finally reached Necropolis. Engaging the super mutants at the Watershed in battle, Ian lost his life. A flamer unleashed by one of the super mutants burned him to death. The smell of Ian's burning body would haunt the Dweller for years to come.[6]

Ian appears in Fallout, Fallout 2, and the Fallout: The Board Game add-on Fallout: New California, and is mentioned in the Fallout Bible.

Retrieved from "https://fallout.fandom.com/wiki/Ian_(Fallout)?oldid=3446102"
Community content is available under CC-BY-SA unless otherwise noted.