I Hear You Knocking 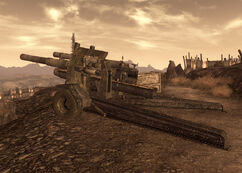 Get a replacement firing mechanism for the Legion's howitzer from the Boomers.

“The best marksmen of the NCR are usually at the rear of any battle. The gun will allow us to strike at them.”— Lucius

I Hear You Knocking is a side quest in Fallout: New Vegas.

This quest is named after the song "I Hear You Knocking", probably the best known version being that of Fats Domino.

Retrieved from "https://fallout.fandom.com/wiki/I_Hear_You_Knocking?oldid=2864643"
Community content is available under CC-BY-SA unless otherwise noted.