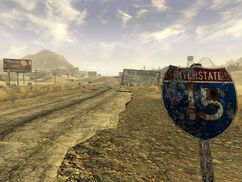 “Caravan is not played in casinos, but is very popular among caravan guards and other frequent travelers on the Long 15.”— Fallout: New Vegas loading screen

The I-15 or Interstate 15 (and on some occasions called The Long 15) is a freeway in the Mojave Wasteland. It used to serve vacationers and commuters alike before the Great War. By 2281, the New California Republic has vowed to protect it from creatures and criminals.

As a whole, the freeway travels northeast, beginning at Dayglow in California, through the Mojave Wasteland and New Vegas, before heading into Arizona and Utah. The Interstate comes close to Zion National Park and goes through Salt Lake City (New Jerusalem) and Ogden (New Canaan). It then continues on through Idaho and Montana and becomes Alberta Highway 4 upon crossing into Canada.

In 2281, I-15 is a four-lane freeway for its entire length within the Mojave Wasteland. It connects New Vegas to the territories of the NCR and is a major trade route for caravans. The New California Republic has jurisdiction over the highway south of Nellis Air Force Base. According to the New Vegas map, the freeway enters the Wasteland near an NCR base called "Long 15," only accessible if the Courier decides to launch nukes toward the NCR at the conclusion of Lonesome Road.

It then travels northeast toward the Mojave Outpost and its two statues before going downhill in a northward direction. At the foot of the hill, it meets the western terminus of Nipton Road (Nevada Highway 164), with its reststop to the west. It then travels alongside the Ivanpah Dry Lake to Primm and the California Sunset Drive-in. It continues north into Powder Ganger territory, where a number of their camps are located. Before turning northeast, it meets with Goodsprings Road (Nevada Highway 161) near Jean Sky Diving.

It then runs parallel to the western train tracks as it leaves Powder Ganger territory into Sloan. Continuing northeast, it bypasses Quarry Junction and Black Mountain, leading to the Junction 15 railway station. Deathclaws overrun the part of the highway between Sloan and the railway station, making it difficult for travelers to reach Black Mountain via the freeway.

The road turns right at Hunter's farm, then turns north again as it enters Fiend territory as a narrow trench. The Samson rock crushing plant, New Vegas Steel and the West pump station are all built alongside this part of the freeway, but the nearby staircases must be used to leave the freeway to get to them.

Once the highway reaches just south of New Vegas, it rises out of the trench to become a heavily damaged elevated freeway that cannot be traversed. From here, the freeway continues above parts of Westside, turning east through Freeside where it merges with Highway 93 at a destroyed intersection. Once it leaves the New Vegas area, it turns north outside the west edge of Nellis Air Force Base, toward Arizona. The south cistern, Freeside's north gate and Fields' shack are all built under the freeway.

I-15 appears only in Fallout: New Vegas.

Add an image to this gallery
Retrieved from "https://fallout.fandom.com/wiki/I-15?oldid=3114205"
Community content is available under CC-BY-SA unless otherwise noted.