It used to serve vacationers and commuters alike before the Great War, running alongside Highway 95, connecting Los Angeles and Las Vegas.[1] By 2281, the New California Republic patrols the Ivanpah Valley stretch of the interstate, attempting to protect fledgling communities dotted alongside it from creatures and criminals.[2][3][4]

However, despite NCR interference, a recent prison break resulted in I-15 closing down to caravaneers and merchants, forcing them to either stay stranded at Mojave Outpost or find other locations from which to do businesses.[5][6][7] As a result, those towns situated on Highway 95 see an influx of traffic and accompanying business.[8]

Joshua Graham mentions traveling along the interstate on his way into Arizona.[9] The roadway enters the area from the southwest corner of the map and travels northeast toward the Mojave Outpost before passing by the Ranger Unification Treaty Monument. At the foot of the hill, it meets Nevada 164 and then travels alongside the Ivanpah Dry Lake to Primm and the California Sunset Drive-in. Before turning northeast, it meets Nevada 160 near Jean Sky Diving.

The highway then runs parallel to the western train tracks as it leaves Powder Ganger territory into Sloan. Continuing northeast, it bypasses Quarry Junction and Black Mountain, leading to the Junction 15 railway station. Deathclaws overrun the part of the highway between Sloan and the railway station. The road turns right at Hunter's farm, then turns north again as it enters Fiends territory. The Samson rock crushing plant, New Vegas Steel and the west pump station are all built alongside this part of the freeway, and nearby staircases must be used to leave the freeway to get to them. As an important division between Fiend territory and the NCR base at Camp McCarran, this section of the highway is sporadically defended with frag mines littered along the road and on certain staircases.

Once the highway reaches just south of New Vegas, it rises out of the trench to become a heavily damaged elevated freeway that cannot be traversed. From here, the freeway continues above parts of Westside, turning east through Freeside where it merges with Highway 93 at a destroyed intersection. Once it leaves the New Vegas area, it turns north outside the western edge of Nellis Air Force Base. The south cistern, Freeside's north gate, and Fields' shack are all built under this section of the freeway.

I-15 appears only in Fallout: New Vegas, and is mentioned in its add-ons Honest Hearts[11] and Lonesome Road.[12] It also appears on an early version of the game's map.[13] 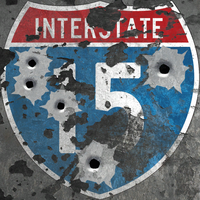 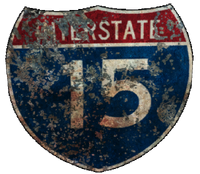 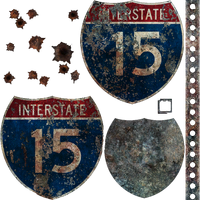