The hunting shotgun is a weapon in Fallout: New Vegas.

The hunting shotgun was built for greater range and power over similar shotguns. Using the less common but more powerful 12 gauge shells, the hunting shotgun is designed to be the mid-to-end game shotgun class weapon, only outclassed by the riot shotgun.

It is pump-action, which means there is a slightly longer delay between shots. It also loads through the bottom, so expect longer reload times, even with the Rapid Reload perk. Due to the gun having a tubular magazine, it is reloaded by hand one shell at a time, as such it can be interrupted mid-way through reloading and fired if needed. This gives the gun the advantage of being quickly available to fire again if only a single or few rounds are needed.

However, it shares the common weakness of most shotguns and automatic weapons in Fallout: New Vegas, in that much of its theoretical power is negated by the Damage Threshold system. This weakness however, can be somewhat countered if the player has the Shotgun Surgeon perk and can become truly devastating when combined with slug rounds. With the choke modification installed, it is the most accurate shotgun in the game, making it effective in long range. Using slug rounds boosts its accuracy even further.

The weapon also takes advantage from the And Stay Back perk.

The hunting shotgun can fire a total of about 995 standard shells, the equivalent of 199 reloads, or 125 reloads when modified with a long tube magazine, from full condition before breaking.

Dinner Bell, a unique variant of the hunting shotgun given as a reward by Red Lucy for completing the quest Bleed Me Dry.

Hunting shotgun with the choke modification

Hunting shotgun with both modifications 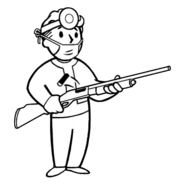 Hunting shotgun in the perk image for Shotgun Surgeon 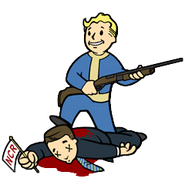 Hunting shotgun in the achievement image for Arizona Killer 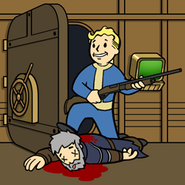