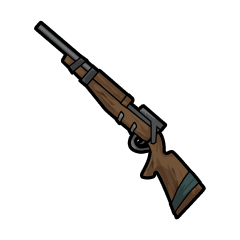 The hunting rifle is a weapon that appears in Fallout Shelter.

The hunting rifle is a bolt-action rifle featured in Fallout Shelter. It is designed for hunting animals, chambered in .32 caliber rounds. This model oddly does not appear to have any iron sights, reducing it's effectiveness at long range. Dealing a minimum of 5 damage per attack, it has the third lowest damage output for a rifle in the game making it effective against most lightly armored enemies.

A high Perception statistic is needed to effectively create the hunting rifle.

Hunting rifle card
Add a photo to this gallery

Retrieved from "https://fallout.fandom.com/wiki/Hunting_rifle_(Fallout_Shelter)?oldid=3101546"
Community content is available under CC-BY-SA unless otherwise noted.