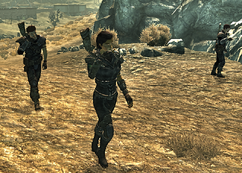 Hunters are characters in Fallout 3.

The cannibal hunters (only named "hunters" in-game), are people who find and kill humans and sell their meat. Usually clad in leather armor, they are often found in groups of three; the standard "party" size for hunter groups. Usually, a hunter party is composed of a shooter/sniper, armed with some sort of long-range rifle, and two scavengers who gather and store the meat. They are almost always equipped with .32 hunting rifles and/or various blades (combat knife, switchblade). In terms of durability, they are roughly on par with standard mid-level raiders.

Depending on how recently they have killed they can either be friendly or hostile towards the player character. If they are standing near a human corpse and drinking Nuka-Colas they will be friendly for a short period of time. Once they finish drinking they will start to mobilize and will become hostile.

When friendly to the player character they can provide the option to buy food, ("I could use some food. Got anything to sell?"). All of the hunters in a party carry their own personal stock of items; their inventories are not shared. These hunters only sell strange meat. After exiting the vending window, a new speech option appears questioning the food on sale, to which the hunter responds with a laugh and reassures the player character that it is "the best kind around," giving them a free sample to boot. They can occasionally be seen hunting a fleeing wastelander, which hints as to the origin of their "strange meat." Sometimes they can also be heard yelling "Save me a drumstick!" while chasing wastelanders, hinting at possible cannibalism. These hunters can sometimes be aggressive to the player character. When killed, among their weapons, ammunition, and armor, fingers may be found on their bodies (if the player character has the Lawbringer perk). Good Karma will be given for killing these kinds of hunters.

These hunters are wastelanders who kill animals and sell their meat. They sell items such as mirelurk meat, yao guai meat, mole rat meat and dog meat They are often found in a group of three. One kills animals, and the other two carry and sell the meat. They have weapons such as .32 hunting rifles, and .32 pistols, or various knives.

They are friendly to the player character, and when talked to, one can ask to buy food, and their inventories are not shared. With the Contract Killer perk, they will drop ears. Bad Karma will be given for killing this type of hunter.

Another type dedicates themselves to cleansing the world to make it a better place, hunting all harmful mutants, raiders, slavers, all bad people, etc. They are found all over the Capital Wasteland.

Add a photo to this gallery
Retrieved from "https://fallout.fandom.com/wiki/Hunter_(Fallout_3)?oldid=3185575"
Community content is available under CC-BY-SA unless otherwise noted.