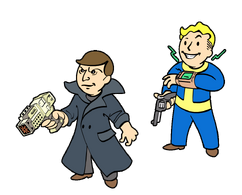 “Every Courser has special hardware that gives them a direct connection to the Relay in the Institute. It's embedded in a chip in their heads. You need that chip. But to get it, you'll have to find a courser.”— Brian Virgil

Hunter/Hunted is a main story quest and achievement/trophy in Fallout 4.

After receiving the quest, travel to the C.I.T. ruins north of Diamond City. The "courser signal" will be available on the Pip-Boy's radio at that point. Tune to it and follow the signal east to Greenetech Genetics.

Greenetech Genetics is filled with Gunners who are fighting Z2-47, the courser. Upon entering the building, the commander of the Gunners starts issuing orders over the intercom. He orders the majority of his troops to retreat up the building and the rest to engage the Sole Survivor. The player character will have to fight their way up through the building. The courser is just ahead the whole time and easily eliminates his opposition, littering his path with Gunner bodies.

Reaching the fifth floor, a salvo of explosions can be heard. Missiles are being fired at the courser (who shrugs them off). These explosions will not affect the player character. On the seventh floor, there is an elevator that goes up to the top of the building.

Once there, the courser can be heard threatening some Gunners for a password. One refuses to give it to him and will be executed. One may intervene in time to prevent the rest of the Gunners from being killed. Approach him and he will ask what the Sole Survivor wants; shortly afterward, he will engage the Sole Survivor in combat unless they say the deactivation code obtained from Mama Murphy. Once the fight is over, one can loot the courser chip off his body and the quest is complete.

After the fight, one can see a woman locked in the room that the courser was trying to gain access to. She asks the Sole Survivor to retrieve the password to the door that one of the Gunners stashed in a nearby toolbox. Once she is let out, she reveals that she is a synth (K1-98) and says that the courser was after her and the Gunners caught her as she traveled across the Commonwealth. She will request to leave and will never be seen again.

Any Gunners that were not yet executed by the courser will beg to be spared. There are no interactions with them otherwise. If the Gunners are not killed and K1-98 is not released, the Gunners will be missing while K1-98 will still be present upon returning to the building.

Retrieved from "https://fallout.fandom.com/wiki/Hunter/Hunted_(Fallout_4)?oldid=3329094"
Community content is available under CC-BY-SA unless otherwise noted.
... more about "Hunter/Hunted (Fallout 4)"
RDF feed
Has platform
PC +, Xbox One +  and Playstation 4 +