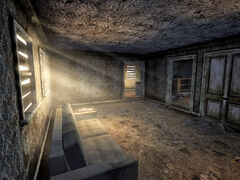 Hunter's farm is a location in the Mojave Wasteland in 2281. It is located southwest of Allied Technologies offices.

The farm is a simple one-story house which consists of a few rooms. There are quite a few empty Sunset Sarsaparilla bottles in the kitchen, with a few Sunset Sarsaparillas in a crate on the floor. There may be a small pack of fire or golden geckos in front.