“This is bullshit! I can't take this any longer! Yahh!”

The hungry raider is a member of the raider movement in the city of Macomb in 2197.

The city was suffering from hunger, so a majority of its population either became raiders or have just simply gone mad.

This particular raider didn't attack the Warrior and his team on sight, hoping to trade the location of the key to the second gate for some food. Whether he was given food or not, he decided that the Warrior had more to "offer", so he attacked him desperately, and was killed as a result.

The hungry raider appears only in Fallout Tactics. 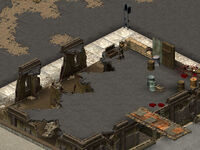 Key to the second gate hidden in a chest on a roof
Community content is available under CC-BY-SA unless otherwise noted.
Advertisement